What should be considered when planning System Integration Testing for a new railway line?

System Integration Testing is an important part of verifying whether a complex system has been correctly implemented.

I believe the V-model remains the best way to illustrate the process (see below).

For new railway infrastructure projects of any size - whether for a new urban transit route or a high-speed network - system integration testing will need to take place at the following levels:

Key stages of a test programme

Before starting the programme, all subsystems should be tested in the factory (FAT) and on site, after installation (SAT).

The system integration testing should then be undertaken - both with and without the vehicle - to test the performance of the infrastructure against the original design intentions.

Once the integration testing is complete, testing under trial operations can focus on the operational performance, including maintenance and safety (evacuation and emergency service access, for example). 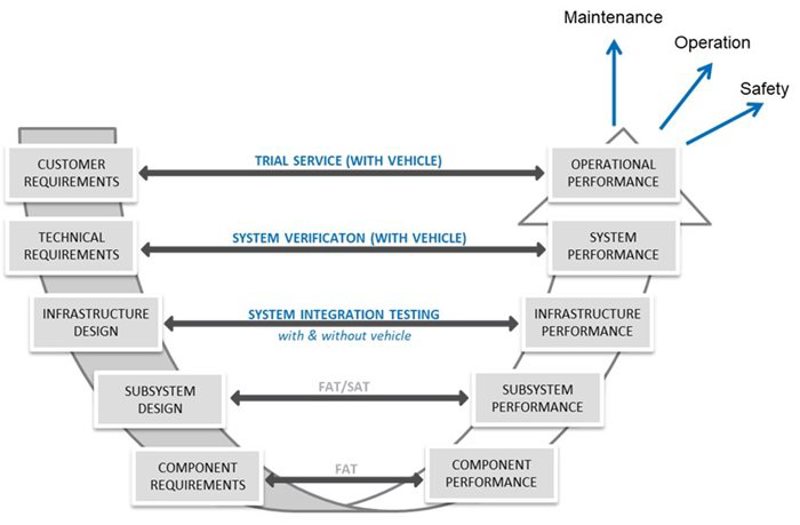 Because these different testing aspects are part of new infrastructure project, it is important for testing to be seen as integral to the design and build process, with the various stakeholders managed centrally.

Most importantly, testing should never be an after-thought - something to be squeezed in right at the end of the project - because that runs the risk of identifying problems only to find the build process is too far advanced for any issues to be easily rectified.

When testing is considered from the project's earliest stages, potentially critical systems can be identified and brought forward in the schedule so that their integration can be tested at an appropriate juncture.

If it is not possible to test critical systems early enough in the final infrastructure environment, testing with a hardware or software digital twin should be considered.

Furthermore, requirements from every level should ideally be centrally managed, making it possible for the team responsible for testing, verification and validation to create an optimal test plan.

What do we mean by “Optimal testing"?

“Optimal testing" means the infrastructure has successfully entered into service without 'over-testing', by which we mean spending time and resources performing tests that, with hindsight, you realise were not required.

To create an optimal test plan, you need experience with systems integration testing and the involvement of stakeholders who can help identify the most critical aspects of the infrastructure. Ultimately, the objective is to determine the smartest combinations of tests, so that unnecessary tests are removed from the programme and the total effort is reduced.

Central requirements management is key to identifying the most optimal combinations. This helps the testing team create an overview of all requirements that are ready for testing and monitor the tests that still need to be actioned. An example of the efficacy of this approach was demonstrated in the programme we devised for the upgrade of a busy tram route here in Utrecht during the summer of 2020.

This project saw the introduction of a new fleet of low-floor vehicles along a refurbished route. But in this case, preparations with the infrastructure contractor, BAM, commenced more than a year in advance, enabling us to agree a definitive programme of over 100 individual tests - across a range of locations, speeds and vehicle configurations - that satisfied BAM’s safety and contractual requirements.

Afforded such advance planning time, the programme was successfully completed on schedule, enabling the new infrastructure to enter into service without failure. The optimised testing programme is considered an important factor in the success of the overall project. How data can drive actionable insights Climate repair technology: what is it and how does it work?